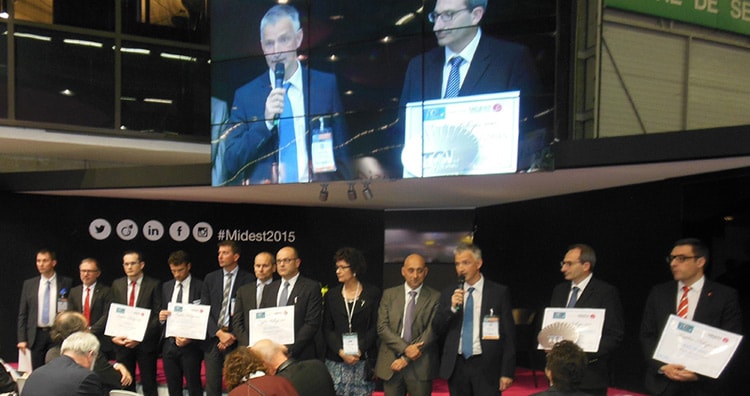 The Tolexpo Trophy, one of the “Midest Trophy” awards, was staged for the first time at the November 2015 Tolexpo event in Paris, attended by ISMR.The Tolexpo Trophy is jointly run by the Tolexpo and Midest organisers. It is open to Tolexpo exhibitors involved in the Tolexpo new products campaign. “This is the only award in France dedicated exclusively to sheet metal, tube and section equipment manufacturers. The winner of the 2015 Trophy was JEAN PERROT with its Maneo Premium LCS – a press brake with automated bending measurement and control,” DBR Events told ISMR.

Launched in January 2015, the Maneo Premium LCS press brake is equipped with a high speed bend angle and correction system. This system, patented by Pinette Emidecau Industries (owner of the JEAN PERROT brand), has been designed for robotised bending cells and for high precision and high productivity bending.

Present in the sheet metal market for over 50 years, JEAN PERROT (based in Chalon sur Saône in France) designs and manufactures sheet metal and steel profile working machinery. It is certified to ISO 9001 (version 2008) and exports its products worldwide. ISMR met Rousseau, line product manager for JEAN PERROT, at the company’s booth at this year’s Tolexpo exhibition in Paris from 17-20 November 2015. 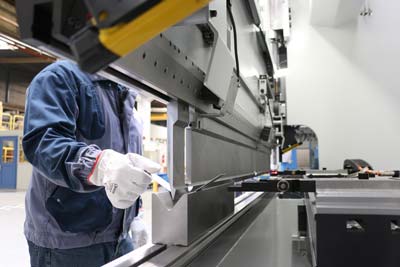 “A key innovation on this press brake is our new measurement system with automatic angle measurement (LCS) to obtain the correct bends on the first press stroke without needing to bend test pieces. This represents a considerable cost and time saving for customers. The bent parts also have very precise angular precision (80° to 160°) and regularity, lengthwise,” Rousseau told ISMR. “This hydraulic press brake is designed for precise and repetitive bending. It is suitable for complex component, large quantity batch-work where speed and precision are vital to ensure productivity.

The Maneo Premium press brake is of a modular design and can be adapted to users’ production requirements. It features electronic synchronisation (Y1, Y2) and an approach speed of up to 200mm/second. Tonnage capacities for this press brake range from 75 tonnes and 2.5m to 2000 tonnes and 12m.” 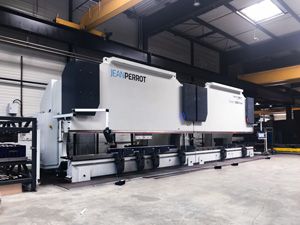 JEAN PERROT has also installed a heavy 14m (1350-ton) Maneo Premium LCS press brake at the Sizun factory of its customer, Oxymax. “It is probably one of the largest press brakes, equipped with an automated angle measurement and correction system, operating in France today,” said Rousseau. “To facilitate the manufacture and transportation of the machine, the assembly was made up of two identical machines (675 tonsx7000mm), coupled & synchronised electronically. This solution allows users to work independently on each press brake for parts of up to 7000mm long, or to work on them ‘in tandem’ for parts of up to 14000 mm. It is possible to bend S235 steel sheet of up to 20mm thick on 14000 mm on this press brake.”

Come and meet us from 6th to 9th September at Global Industry at Eurexpo Lyon!

Postponed as a precaution, the Global Industrie Exhibition will finally be held from the 23rd to the 26th of June 2020 at the Paris-Nord-Villepinte exhibition centre.

From 31st March to 3rd April 2020, come and meet us on our booth 5S35 in hall 5 at the Paris-Nord-Villepinte exhibition centre.

You wil discover our cutting edge technologies and processes for sheet metal processing:

4.0 Bending Day : an opportunity for Jean Perrot and its partners to present the new E COBOT BEND solution

The 10th of October at 9 a.m., JEAN PERROT will organise a technical day on the theme ‘’Bending 4.0’’. This event will be held at Jean Perrot’s headquarters of Chalon-sur-Sa...